Sunderland College makes use of cookies. By continuing to use our site you are agreeing to our use of cookies. If you would like to know more, you can read about how we use cookies. We take your privacy as seriously as you do. Take a look at our Privacy Policy to find out what we do with your personal information and how we’re keeping it secure.

In partnership with Sunderland College, Improtech Soccer’s mens side won their cup final against Middlesbrough College.

There were 2 cup finals at Eppleton Colliery Welfare Ground. The colleges mens team coming runner up, losing narrowly to Darlington MG and the other against Middlesbrough the mens team won which was thoroughly well deserved.

Participating offered the players exposure to a cup final in a very competitive field, giving them a lot of experience and exposure to pressure filled situations in the game, which helped them to cement their success over the course of the football season.

The players are hoping to maintain standards and aim to compete to the highest level possible in the ECFA, having recently been approved for this divisional status and the NECL in the upcoming 19-20 season.

“As development centre co-ordinator I am proud to represent our mens development centre teams through Improtech’s provision. The measure of the success from season to season is evident in the results achieved and the growth of the delivery of the main programme at Sunderland College continues to support this level of accomplishment. NECL winners, cup final winners and finalists across our squads representation in a variety of competitions marks the end of an outstanding 18-19 season, we look forward to seeing the programme continue to make important strides forward both on and off the pitch as we move towards pre-season, making plans for 19-20. The Improtech development centre squad have applied themselves very well from an educational standpoint and all are continuing to make progress in the classroom on their main study programmes across the Level 2 Sport Technical Diploma and Level 3 Sport (Performance & Excellence) programme.”

“It gives me great pleasure as captain on the day of the mens development centre squad to lift the trophy for our cup final success. I really enjoyed the role of leading the team and taking the ownership to encourage others. We came alive after the first 15 minutes with a slow start in the game, but as individuals we came together as a team framework. Every one of the players, from those coming off the bench and those part of the squad were all pulling in the same direction to ensure we won this match. There were some standout performances in the game and I believe we were deserved winners on the day. To win, and be defending champions, bodes well for the future, to continue to attract players to our programme here at Sunderland College. I would like to place special thanks to Colin Larkin for giving not just me, but all of the squad the confidence to work for each other, this level of hard work has seen us move through the rounds of the competition culminating in this success.”

“This has been a hugely successful season for both mens teams which is the culmination of a massive amount of hard work and dedication they put in every day on the training pitch. Their behaviour and togetherness has been exemplary all year and the cup win was nothing short of what they thoroughly deserved. Our mens side narrowly missed out on the title despite reaching the final and we are disappointed we didn’t quite get over the line with the cup win to support our earlier NECL league winners title, but we are very proud of the success these players have achieved this season. Our football development programme continues to develop and grow and the success of both men’s and women’s teams this year highlights this growth.”

If you have a talent for sport and want to combine your studies with training at one of our development centres, click here to find out more. 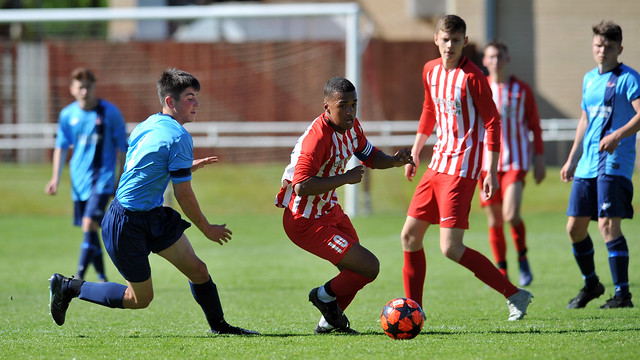