Students from Sunderland College, Hartlepool Sixth Form and Northumberland College were recently challenged to create an innovative logo that would be used as part of an exciting new safeguarding and wellbeing initiative across the College Group.

Stay Safe, a newly developed function at the College that enables students to report any concerns directly to the Safeguarding team to action, will have a strong visual identity across the College Group when it’s launched this week thanks to the new logo.

“Safeguarding and supporting the wellbeing of our students is vitally important to us. Across our College Group, we have a number of educational platforms in which students engage such as Canvas, Google Classroom, Microsoft Teams and Moodle.

“The purpose of our new Stay Safe initiative is to create a uniformed icon and function that is embedded across all three of our Colleges – Sunderland College, Hartlepool Sixth Form and Northumberland College. The new function will allow students to flag a concern directly to our Safeguarding team, which can be actioned straight away.”

Creative arts student, Keira Todd, was chosen as the winner from 32 entries and received a £100 voucher. The talented 16-year-old from Penshaw, who is currently studying BTEC Digital Art at Sunderland College’s Bede Campus, said:

“I decided to enter the competition because it was introduced to my class in a creative ready lesson and we were able to work on our logo ideas at college. When I heard about Stay Safe, I began to think about what imagery would look inviting and could be linked to keeping safe, which is how I came up with the idea of using a heart.

“By taking part in the competition, I learned that when making a logo sometimes it is better to be more simplistic. Originally I tried adding more to the logo and fully filling the heart with colour but I realised that it looked a lot better being simple. I mainly used Photoshop to design my logo.

“When I found out that I had won the competition I was excited but also surprised as I had seen some of the other designs that had been submitted and knew that there were some very good logo design entries.

“I am really enjoying my digital arts course at Sunderland College as I have learned lots about graphic design, photography and the importance of typography in design and I have also developed my skills in using Adobe programs. In the future, I’m interested in working in photography or graphic design.”

The Stay Safe initiative will be launched across the College Group during week commencing 9 May by the College’s Safeguarding team. The winning logo will also appear on promotional materials such as pin badges and banners.

Stay Safe events will take place for students on: 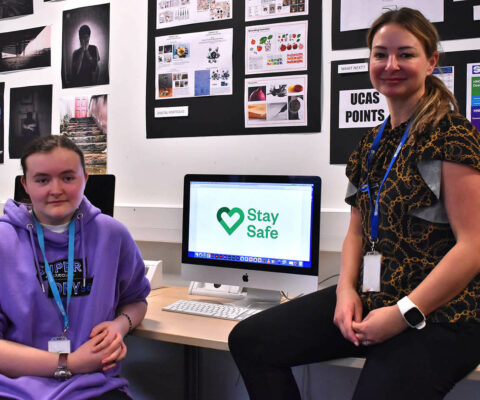 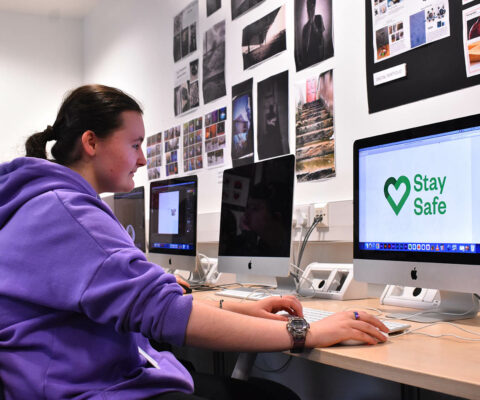